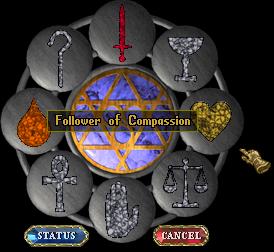 Defined as the quality of having nonjudgmental empathy for one's fellow creatures, in UO, Compassion is:

The Virtue Compassion is but one of eight virtues found in the Virtue System. It is represented on the Virtue Gump as a heart.

The Virtue of Compassion allows a character to resurrect others with more than one hitpoint, as with normal resurrections. The benefits of Compassion are well worth the effort in gaining the ability, as it helps prevent rez-killings from both players and monsters. It also gets the resurrected person back into the action faster and conserves the mana/bandages/time healing them back up to full hit points. There are also aspects of roleplaying in which having the Virtue of Compassion is desirable.

Gaining in the Virtue of Compassion is accomplished by escorting NPCs or Prisoners to their requested destination. This is done either via Gate Travel or simply walking and will reward you with 500 gold and progress towards achieving a level of Compassion. Rescuing Prisoners from NPC brigand camps, orcs, lizardmen, etc. will reward you with more progress (roughly double) than NPC's escorted from towns.

As you make progress, the dots at the top of the Virtue of Compassion status gump will begin to fill after completed escorts or rescues. When all ten dots are completed per level, you advance a level in the Virtue. At each completed level of Compassion, the Virtue icon will fill-in with a darker color and the title will change to indicate your current level of achievement when you mouse-over the Virtue icon from the main Virtue menu. Your level of achievement in each Virtue is publicly viewable by other players if they double-click the Virtue menu in your paperdoll.

Higher levels of Compassion confer increasingly higher benefits, which is discussed below. You can only gain from five NPCs per 24 hours, therefore rescuing prisoners will speed your progress versus doing just town escorts. Additionally, after you have completed five in a 24 hour window, there will be a system messaging indicating you must wait a day until you will gain again (although you can still continue doing more that day, but will only receive the gold reward).

Research shows that using the fastest method of prisoner rescues, i.e., a gate casting mage, you will perform roughly:

Additional hit point bonuses after resurrections from a player with Compassion:

At only 25-30 minutes a day for a few weeks working on raising Compassion, its not really that much of an effort. Additionally, at 500 gold per escort, doing escorts is a safe, easy and profitable way for new players to make gold.

The fastest and easiest way to gain in compassion is to drink a bottle of Compassion Sage daily. Drinking one bottle can give as much compassion as 5 NPC escorts.

As a side note, there are often several NPC brigand camps (many with Prisoners to rescue) on the little island just outside of Trinsic to the east. There is also a jail cell which always spawns a prisoner in the Orc Cave to the northwest of Britain.

As a minor note, there is a five minute time limit (lowered from 15 minutes on June 29, 2000) between escort quests. Prisoners found in NPC brigand camps and the orc dungeon used to be available for immediate rescue, but this was changed to the standard 5 minute timer in late 2010. 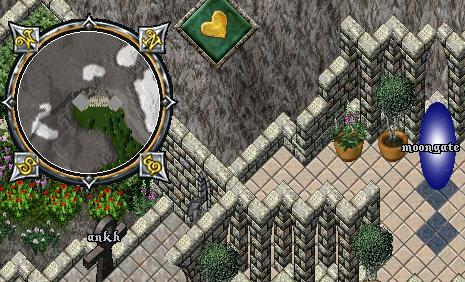 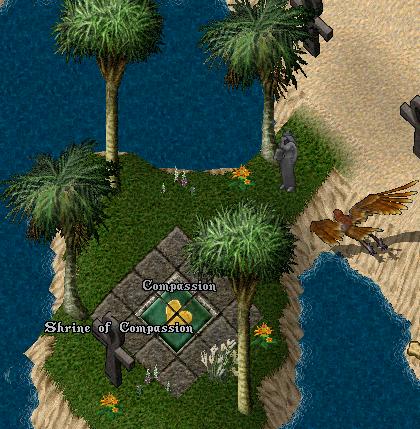 The Compassion Moogate leads to and from the mid-northern edge of Ilshenar (101°41'N, 7°35'W). It is close to the following features:

The Compassion Shrine (100°50'N, 7°55'W) is a named ankh that is located next to the Ilshenar Compassion Moongate.

During the rule of Blackthorn the Deceiver, Compassion was perverted into the following dictum: "Thou shalt help those in need, or thou shalt suffer the same need."