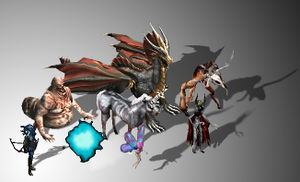 Peerless Bosses, or just Peerlesses, are boss monsters that spawn in certain dungeons that were introduced with the Mondain's Legacy expansion. Stygian Abyss expansion added two more to the already available six, making a total of eight Peerless bosses. Along with Champion Spawns, Peerless Bosses are one of the primary sources of rare Artifacts.

Each boss has a location of its own and some of these areas have a requirement just to enter them. Their rooms can be accessed only by acquiring certain keys.

For most, the pattern is that keys are obtained from certain monsters within the dungeons. In only one case (Travesty) is the key literally a key. Most of the time it is some other items. Keys can be readily identified because they are often blessed and have a countdown timer on them. They expire after this countdown timer runs out to prevent stockpiling.

For Mondain's Legacy peerlesses, these keys are exchanged at a certain place in the dungeon for a main key. This key is then used to access the Peerless room. Once the keys are used or expire, no one else may enter the boss room, and the rooms can only be entered with the proper keys. A maximum of 30 people (or 3 parties) can enter a Peerless area or boss room at one time. Once inside the boss room, you are under a time limit of about 2 hours. Once the time is up, your group is ejected from the room.

Once the boss is killed, another time limit, of about 10 minutes, goes into effect. You have about 10 minutes to loot or you are ejected. From the Peerlesses are obtained certain unique Peerless Artifacts and ingredients with which certain other artifacts can be crafted.