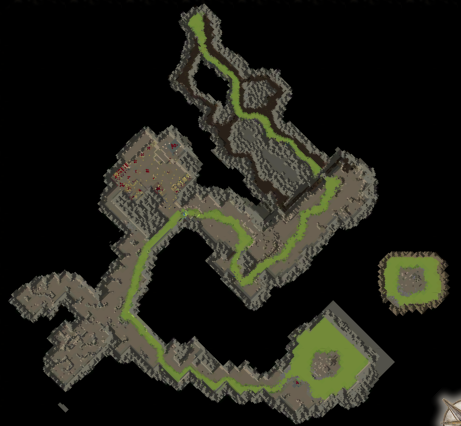 The Palace of Paroxysmus is a dungeon located west of the city of Papua in the Lost Lands in both Felucca and Trammel. It was introduced with the Mondain's Legacy expansion. It is a fairly high-level dungeon, consisting of many hard monsters. Several quests from Heartwood will take you here.

Despite the presence of many demonic creatures within this dungeon, and despite the official fiction (as related above) that Chief Paroxysmus is a demon prince, the demon slayer type does not appear to work on him.

In order to gain entry into the Palace of Paroxysmus, must you must have an Acid Proof Rope in your bag.

The underworld lair of Chief Paroxysmus has been exposed to the surface. Minions and inhabitants of his realm are already seeping out into the world to wreak havoc and feed. Adventurers enter through a huge sinkhole and work their way through twisting passageways, traveling past deformed shapes melted into the stone by the corrosive acids that ooze through the stone cracks and flow in the venomous river to reach the palace proper. The very air of the place is acrid and tainted, making exploration deadly.

As a daemon prince, Chief Paroxysmus has Molochs, Balrons, Arcane Daemons, Succubi and Chaos Daemons under his misshapen thumb. Other lethal creatures simply enjoy the ambiance of his realm and make their homes there. These creatures include: Plague Beast Lords, Plague Beasts, Plague Spawns, Slimes, Poison Elementals, Acid Elementals, and Earth Elementals.

4 keys are needed to Summon Paroxysmus.