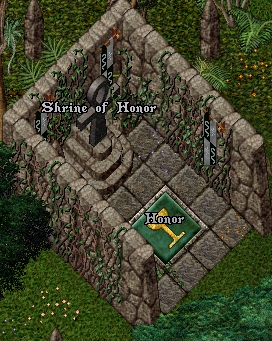 Honor is a: Virtue; a Shrine, and an Ilshenar Moongate.

When activated via the Virtues Menu, you may target a given creature that is entirely undamaged (that is, it's Hit Points, Stamina and Mana levels must be at their maximum). It could originally be used against players in addition to creatures, though this was removed in a later publish.

If you then kill the creature you are granted honor in accordance to its fame level and how "honorably" you fought it. Allowing your target the first blow and staying close to it will grant you higher levels of honor than using ranged attacks from a distance. For tamers, stay close, do not cast spells (they will lower your gain). Daemons will get you well into the Follower level, Balrons are good for reaching Knight, some would suggest Succubi, but their area attack can be bothersome.

Honor is an excellent complement to Taming. Building Honor will allow you to tame pets without being attacked. The follower level will keep you safe for 90 seconds and the Knight level will provide 5 minutes of unmolested taming (very useful with Greater Dragons). Stay just off screen from your intended target, Activate the virtue, a macro key of [invoke virtue][honor] works well, or the pentagram on the top of the paperdoll, double click the Honor button and target yourself and click ok. Word of warning, if the intended pet targets you before you click the OK gump, you will be attacked, and you must hide to reset it.

Honor works hand in hand with Bushido in that activating it with a skill of 50 points or more also initiates the Perfection system.

It also allows you to return to a monster infested area to retrieve your items off your dead body.

The reward for honorable combat is the ability to move amongst monsters without them becoming hostile to you. To do this, you must activate the virtue and target yourself. The effect ends after a certain time or when you next perform a hostile action. According to developer Logrus, using Honor on oneself grants a shortly durated damage bonus of 25% (source: Stratics UO Warrior Profession Forum).

You can invoke honor once every 5 minutes. The duration it lasts depends on how high your honor is. A knight of Honor will last 3 times as long as a seeker. This virtue only drains as you use it (as opposed to others such as Valor, which drain over time).

When using the Bushido skill Honorable Execution on an honored opponent, if successful you will be granted an honorable damage bonus.

Located in the far southwest (166°38'S, 28°20'E) of the main continent, the Shrine of Honor is a fully functional shrine; a character may lock his or her karma, be resurected, or even tithe gold there.

Wearers of the Ankh Pendant who chant the mantra "Summ" at the shrine will receive the following bonuses for one hour: +1 Mana Regeneration, +1 Stamina Regeneration. There is a fifty percent chance that one of those bonuses is increased to +2.

Honor moongate is a popular means to reach Central Ilshenar.

According to Ultima V, Honor is Courage to seek and uphold the Truth. Lord Blackthorn perverted the Virtue to read "If thou dost lose thine own honour, thou shalt take thine own life."