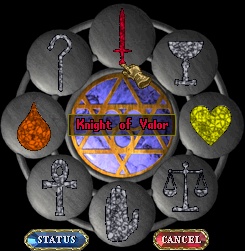 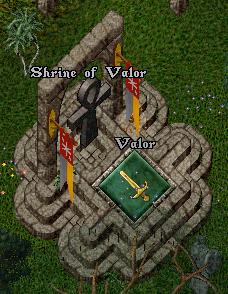 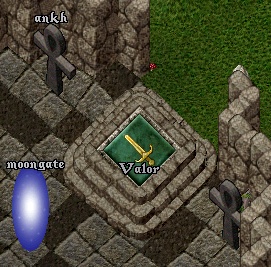 Valor is a: Virtue; a Shrine, and an Ilshenar Moongate.

Valor is the Virtue that enables characters to start a Champion Spawn. When the third level, or Knight of Valor, is reached, the character can invoke the virtue and target a Champion Spawn altar, thus activating it.

Altars can be targeted only once per spawn: to activate it if inactive, or to add more red candles according to the user's amount of Valor. The higher the amount of Valor, the better the chance to gain more red candles. Altar advancing is often used to finish the harder levels more quickly, especially at the Lord Oaks, Semidar and Neira spawns.

Valor is obtained by killing creatures in a Champion Spawn. One random Felluca spawn will activate upon server-up so Valor may be obtained to start the rest of the altars.

The location (157°36'N, 82°7'E) of the shrine is off of the main continent, specifically on an island south of Jhelom. The Shrine of Valor is a fully functional shrine; a character may lock his or her karma, be resurected, or tithe gold there.

A wearer of an Ankh Pendant who speaks the word "Ra" at the shrine will receive +2 Stamina Regeneration for one hour. A character need not continue to wear the pendant to retain the bonus.

Located in the north of Ilshenar (123°45'N, 55°53'W), Valor Moongate is the primary means to the Valor Champion Spawn. Also, it is close to the Cyclopian Garden, the Memorial to Gwenno, and Terort Skitas. It is an alternative route to the Pass of Karnaugh.

In Ultima V, Lord Blackthorn perverted the Virtue to read "Thou shalt fight to the death if challenged, or thou shalt be banished as a coward."