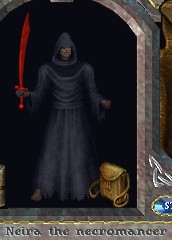 A lady of true darkness, Neira rules over the undead, as the queen of the Unholy Terror Champion Spawn. Wielding a blood-red scimitar and hidden beneath a night-hued shroud, she rides into battle atop a gruesome skeletal steed. Should you have the misfortune of encountering this malevolent mistress, beware the Unholy Bones. From these bones will sprout the following undead creatures:

Due to a bug, her sword used to be stealable by players, but this has since been fixed.

Despite the official backgound on Neira, this undead boss does not move much. She will stand still until attacked up close. She will then move about while trying to avoid melee combat. Barracoon the Piper also exhibits this behavior.

Like the Dark Father of dungeon Doom, Neira will throw Unholy Bones at her attackers. The situation around her quickly can become chaotic and uncontrollable with dozens of creatures that spawn during combat. As an added bonus, she casts Necromancy spells, including the detested Blood Oath. Be careful when attacking her on a melee character because you may get Blood Oathed and instantly kill yourself.

As Neira's slayer vulnerability is Undead, she will fall quickly to multiple Flamestrike while equipped with slayer spellbook. The Magery spell Earthquake also does a large amount of damage to her. It is advised that during a raid situation, Earthquakes should be used to shorten the time needed to drop her. Earthquaking will cause a great deal of spawn to build around her, which can lead to problems.