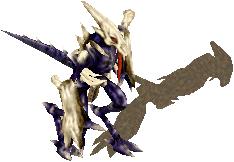 As one of the vilest creatures on Malas, the Demon Knight is a force to be reckoned with. This hulking beast is a fearless creature filled with a thirst for death and destruction. It can only be found in Dungeon Doom, and even there it must be summoned, for it will not make an appearance for anything less than a worthy opponent. Defeat its subjects to conjure it from its mystical plane, but beware, doing so will incur its wrath and this is one foe not to be taken lightly. Infused with magical energy, its spells are deadly. Combine this with strength and intelligence far beyond any normal being and you've got one lethal creature on your hands. No lone adventurer could stand against this monstrosity-your success will depend on the assistance of others.

Dark Fathers are a demon or daemon slayer type (the latter is now defunct and is only seen as a rare "legacy" item). Before Publish 48, using slayer weapons was not as necessary, and sometimes could be more detrimental than anything, due to the Dark Fathers' extensive use of the Blood Oath spell. However, this Publish appears to have enacted greater rewards for doing more damage, and slayer weapons are once again necessary. Further, changes to Blood Oath were enacted that made the spell less catastrophic.

Every few moments Unholy Bones will be tossed at random attackers. The bones can be cut up with a bladed weapon such as a Dagger. The stronger the potential summon, the more times you have to cut the bones. Even if you don't manage to destroy the bones the summoned creature will be perhaps a Zombie instead of a nasty Lich Lord.

Dark Fathers love to cast Necromancy spells. They are particularly fond of casting the aforementioned Blood Oath (though less often since Publish 48 than hitherto) and summoning Revenants. Even without Blood Oath, they will reflect back upon you about 5% of all damage that you deal to them. Mages can use summons to avoid damage, such as Energy Vortexes and Earth Elementals. Tamers can hold their own if they have Veterinary but will have to deal with frequent Wither attacks. Bards can help all fighters with their Discordance skill or provoke unholy summons back on the Dark Father or each other.

One tactic which can work involves the exit gate platform. The small area can be blocked up by players with only the Dark Father being close enough to attack. All unholy summons will be out of reach except for magic casters such as the Lich Lords. Typically, a warrior stands directly on the gate or on the tile in front. Archers stand to the north of the gate. Warriors and archers cross heal one another. Pets and summons generally close in from behind, attacking the Dark Father from the south, though sometimes it's beneficial to have a pet right on the gate. Mages stand in the rear, healing and attacking. Though this tactics is not as effective as it once was, it still works and is usually more effective than the other common tactic, which is to drag one or more Dark Fathers into the hallway area, and fighting them there.

The Dark Father has many different possible names.

The corpse shows up as "a daemon knight corpse."