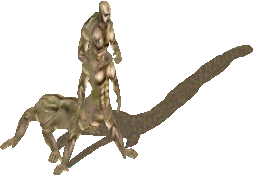 The Darknight Creeper is truly one of the stranger creatures that calls Dungeon Doom home. With two torsos, one stacked on top of the other and five pairs of arms (3 sets of them used in place of legs!), it may appear to be at a disadvantage—after all, something so oddly shaped couldn't be that much of a threat, right? Oh no. This misshapen beast knows exactly how to use its unusual form to its best advantage. With brute strength, it can easily take on its attackers hand-to-hand, but it also has high intelligence and some wicked spells at its disposal. Its thick skin provides a good amount of resistance to both poison and energy, and complete immunity to cold damage. It'll take sheer persistence and a good amount of cunning to defeat this monster.

When struck with damage of approximately 70 or higher, there is a chance the Darknight Creeper will release a fluid on the ground around it which, when stepped upon, will cause major damage (~30 hp per hit) and drain stamina. The Darknight Creeper also makes frequent use of Deadly Poison and spellcasting. When fighting with weapons, watch the damage and be prepared to fall back once it releases its cold fluid.