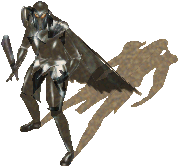 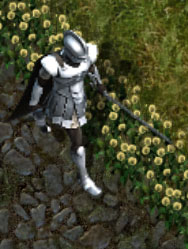 Located in Dungeon Doom, the Shadow Knight is a vicious adversary with the desire to destroy all that approach its lair. This Underworld warrior shows great cunning and strength of mind. Swift and accurate with a weapon, the Shadow Knight can call down the powers of the mystical plane with the same fearsome ability. Capable of massive blows that can knock an adventurer into immobility and able to regenerate both physical and magical skills with equal ease, the Shadow Knight is not the opponent for a single warrior or mage.

The Shadow Knight is more tricky than tough. Any warrior can easily tank one or two. Once one is down to about half life, it will teleport away and hide. You must then locate it and Reveal either with the spell, dealing area damage, or with Detecting Hidden. If you don't have the Tracking skill a good tactics is to have a pet set to follow each knight. When one teleports and hides the pet will follow and stop right next to them.

Mages can deal good damage with Energy Vortexes. Just about any template works fine in this room.

Shadow Knights have an ability similar to the Impaler, where they summon a small circle of candles, causing those within the circle be become unable to run, but this can be resisted with the Resisting Spells skill.

The Shadow Knight can spawn with several possible names.