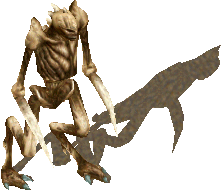 An awesome opponent, the Impaler is found in Dungeon Doom. The Impaler is not an opponent for the weak of heart or mind, for skill alone will not be enough to defeat it. Wiser than the wisest mage, and stronger than the most powerful of warriors, the Impaler is fearsome in melee combat. Magic spells leave barely a mark on this creature, which is also immune to many attacks. An adventurer would be wise to approach this creature with caution and only with others – if he or she dares approach it at all!

The Impaler employs frequent use of necromancy spells, most notably Blood Oath and Strangle. In addition to moving quickly, it can use the Teleport spell to follow a fleeing player even when mounted and running, and will constantly strike players with Deadly Poison. Occasionally it will summon four candles around it, causing anyone within the candles to be unable to run for a brief period, however this can be resisted with the Resisting Spells skill. The Impaler is also immune to Armor Ignore. These abilities combined can cause the Impaler to occasionally do a considerable amount of damage in a short time, especially when it manages to land consecutive blows. A weapon capable of Double Strike with either 100% Fire Damage or Consecrate Weapon is the surest way to damage the Impaler.