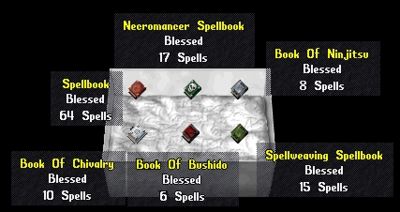 An open spellbook, the Book of Chivalry.

Though often considered the purview of Mages alone, Spellbooks are, in fact, the armament for eight different templates:

The game mechanic known as a spellbook serves the needs of a variety of templates, so not all of the spells contained within can be considered traditional magic. The bushido “spell” of Counter Attack is far more like a Special Move than a magic spell.

The first two pages of every spellbook contain an index of the contents. The Paladin’s Book of Chivalry also lists the Tithing Points a character has on the front page. The pages of a spellbook are turned by clicking the curled page in the upper right-hand corner. A character may also turn directly to the spell desired by clicking on the name of the spell. To return to the index page, simply reopen the spellbook.

Magery, Mysticism, Necromancy, and Spellweaving spellbooks begin with no spells. Spells are added to such spellbooks by dropping an appropriate scroll onto the spellbook in question. Low level magery spell scrolls can be purchased from NPCs that are located in town magery shops, while high level scrolls can be found as loot on certain monsters. Obviously, scrolls can be crafted by practitioners of the Inscription skill who also have enough Magery. For this reason, player vendors also sell spell scrolls.

Spellweaving spell scrolls primarily are gotten from Elfish quests in the City of Heartwood. However, player vendors sometimes carry them. Two of the spells can only be gotten via quest, the spells Summon Fey and Summon Fiend.

Book of Bard Masteries can be obtained by completing a quest for the specific path of the Bard Masteries that are The Beacon of Harmony for Peacemaking, Indoctrination of a Battle Rouser for Provocation and Wielding the Sonic Blade for Discordance.

Magery, Mysticism, Necromancy, and Spellweaving spellbooks are craftable, and as such can contain powerful modifications (more so if the scribe also has the appropriate skill). There are also artifact spellbooks for both Mages and Necromancers. Mages have six:

and Necromancers have three:

Of all of the spellbooks, only the Tome of Enlightenment is not blessed.

Spellbooks can be dyed using Natural Dyes. Spellbooks have no weight (no matter how many spells are inside).