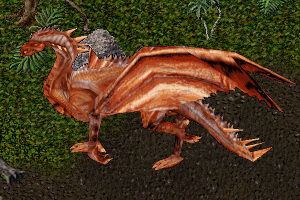 Colossal in form and quick to anger, Rikktor is a dragon like no other. What his slithering, cold-blooded minions cannot defeat, he surely can. A quick snap of his monstrous jaws and the slash of his frightening claws can make short work out of even the hardiest of adventurers. He is a force of nature -- even the earth itself trembles in his presence.

Rikktor is a very large Dragon boss. He is very slow moving, yet has the potential to do an incredible amount of damage very quickly with his Earthquake attack and melee combat. Rikktor does not cast spells.

Rikktor's slayer vulnerability is Reptile. While he does have a slayer, Rikktor will fall much quicker to the Mind Blast spell, as his resists are extremely high with the exception of cold.