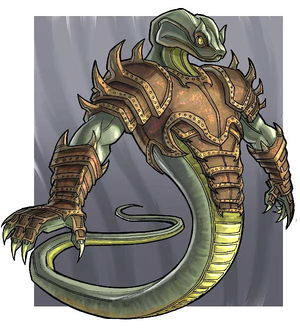 Ophidian from the unreleased Ultima X: Odyssey.
Click to enlarge

Ophidians are a monster race that was introduced with The Second Age Expansion. A snake-like race, they are in a seemingly eternal war with the Terathans, an arachnid-like race.

Ricardo the Thief, when escaping from imprisonment by the Terathans, stole sacred objects from the Ophidians during the escape, thus setting off brutal Ophidian attacks on Britannia. (See Ophidian War.)

The following fictional "backdrop" of this evil race largely details their history prior to the discovery of the Lost Lands by Crawworth and their history in the single-player Ultima games, which is separate and distinct from UO history.

The Ophidian culture started in the Lands of Danger and Despair shortly after the sundering of the continents after Mondain's defeat at the hands of the Stranger from another world. One of the kings of the land, Shamino, was stranded in the Lands of Lord British, and the other, the King of the White Dragon, went insane killing himself and his subjects.

It was at this time that the Great Serpents contacted the remaining people from the Void. They told the people that if they followed the Great Serpents, they would prosper. The newly named Ophidians quickly built their culture around the Great Serpents and their virtues (Order, Chaos, & Balance). They established cities and shrines throughout the renamed Serpent Isle, most of them beneath the huge mountain ranges of Skullcrusher and Spinebreaker, though some were built upon the existing cities. Blackrock was a small, but important part of the Ophidian culture, as it was used in many of the holy items made for use in the shrines, and were imbued with certain magical properties.

The Ophidians lived in peace for many years, though the exact length is unknown because of time differences between our Britannia and the Serpent Isle. They had many accomplishments, one being the Serpent Gates, or Dark Path as it was later called. The Serpent Gates allowed instantaneous travel between many of the Ophidian holy places and cities. Another, perhaps the most spectacular of them all, was the Wall of Lights. Three of these magical Walls were made, and they allowed the Hierophants of Chaos, Order, and Balance to enter the Void and commune with their benefactors the Great Serpents.

All of this peace and prosperity was not to last, however, as the Hell-Spawn Exodus, during the Third Age of Darkness, pulled the Great Earth Serpent (also known as the Silver Serpent) from the Void in order to protect its castle from assault. The Great Earth Serpent was eventually freed by the Hero, but when he returned he found the Ophidian culture and cities destroyed. During the Great Earth Serpent's long absence, the rival Serpents of Chaos and Order used their followers to wage war against each other in what became the War of Imbalance. During this war, the cities were destroyed and most of the people killed, and eventually Order prevailed. The Chaos Serpent was split into the three Banes, and entrapped by the servants of Order. Having nowhere to live, the remaining servants of Order fled through the Wall of Lights. To where they fled is a mystery, and none but the Order Serpent itself may know. But the Order Serpent's victory was short-lived, as he was alone in the Void, without followers, he went slowly insane. This is what greeted the Serpent of Balance upon his return. The ruins of the Ophidians lay forgotten until the arrival of the settlers, led by Erstam the mage, that fled from Britannia and the rule of Lord British. Yet these people did little to study or preserve the remains of the ancient culture. Upon the arrival of the Avatar, the Stranger from Another World, the Ophidian cities and shrines were once again discovered by the Avatar and his Companions. Through the efforts of Avatar, the Serpents were restored to their place in the Void, yet the Ophidians still lay in their mountain tombs, but their souls now rested in the Void.