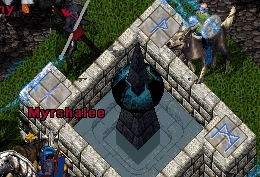 Blackrock is a powerful substance that has been found several times throughout the history of Ultima Online. In addition to those who have sought out blackrock, it has been a reward that spawned in a character's backpack for participation in certain events (e.g., Ophidian War). It has limited in-game effects, but has an important place in the fiction of the game.

Reappearing in 2007, Blackrock continues to be associated with large upheavals in 2008.

Infected: Humans and Elves are equally susceptable, though the risk is controllable. It seems to have affected only those who experiment, or have experimented in the past, with blackrock pieces. Numbers are uncertain at this point, though most of the infected appear to be mages.

Symptoms: The earliest warning sign is hearing voices. The voices can range from simple greetings, to attack commands and snippets of random conversation.

Prevention: As it appears the host strain only affects those who experiment with blackrock, prevention is relatively straightforward. Don't mess with the stuff!

Treatment: There are no known treatments to cure or even alleviate the symptoms of infection.

Contagion Level: Medium. The Host has a chance to pass on the Infection Strain (see below) to Animals and Monsters in close proximity. The Host strain cannot be transmitted between one person and another.

Infected: Any Animals and Monsters in Britannia and the Lost Lands appear to be susceptable. Infection is caused by coming in close proximity to a human or elf infected with the Host Strain.

Symptoms: The Infected creature will become berserked, regardless of its normal state. Firstly, they seem to attack the person who infected them, and then will gladly attack others. Both passive and aggressive creatures will behave the same.

Prevention: Animals and Monsters in Trammel and Felucca should evacuate these areas and move to Malas, the Tokuno Islands, or most preferably, Ilshenar... to the Meer town of Lakeshire.

Treatment: Alas, there are no known treatments, and once infected, death is likely. As most infected creatures are killed too quickly by the people who contaminated them, it is not known whether the infection itself is permanent, treatable or even damaging to the infected creature in the long term.

Contagion Level: None. There are no known cases of the Infection Strain being transmitted between one creature and another.

It has been reported, and confirmed, that if you try and train your skills in the area where the Black Crystal is, the same area you can mine large chunks of blackrock, your skill gain is increased.

Information about the skill gains:

You will see the message "You are infused with the intense energy of this area" when you get a skill gain.
While training in these areas, your skill gain can increase from 0.2 to 0.5
Carrying blackrock while training skills has no affect. Only when training in these areas will you have the enhanced skill gain.
Also works for GGS. Great for when your close to Grandmaster or higher.
Best skills to train in that area: Peacemaking, Musicianship, Stealth, Hiding & of course... Mining

Good luck staying alive in that area while trying to gain skill...

Just prior to the advent of Trammel, an event occurred where a powerful creature known as a Blackrock Elemental had to be slain in order to repair the Bell of Courage. Also, casting the little-known Armageddon spell while wielding blackrock caused an explosion that instantly killed the character. It includes some wonderful graphics.

Blackrock is a mystical mineral that can bend space and time, and is known to resist magic. It is able to open portals to other dimensions and summon creatures through them. It is crucial to producing the Black Moongate, by which the Guardian attempted to enter Britannia. It was also how the Avatar managed to escape the Guardian's trap on the world of Ultima VIII:Pagan (and became the Titan of Ether) and how he contained the Armageddon spell by which he ascends and the Guardian is destroyed). Blackrock was used in Ultima IX: Ascension to make strong armor and a Blackrock sword, though its suitability for this purpose has never previously been established.