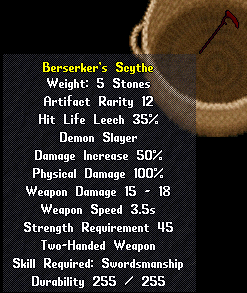 The Berserker's Scythe is a rare Scythe that was dropped by Daemon Berserkers, during the demon attacks on the city of Magincia during the Fall of 2007. This event was Part I of the larger event arc Warriors of Destiny. It counts as a Mystic weapon when attacking certain creatures that can only be fully damaged by such weapons. It is similar to the Berserker's Bardiche, which was dropped by Ophidian Berserkers during an earlier scenario.

The Scythe has the ability to, on rare occasions, blackrock infect a target.

It also dropped during the Mad Mage event, in the alternate Moonglow in the Ethereal Void, again on Daemon Berserkers.

It had a point value during the Spring Cleaning 2008 event.