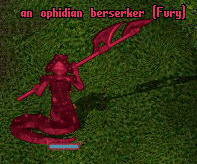 The Ophidian Berserker was first seen in the Ophidian Invasion of Papua and Vesper during the months of July and August of 2006. As the name implies, they are frenzied in battle and held to be nearly invulnerable. At the time, even the most jaded of warriors was shocked by just how vicious the Berserkers truly are. Normal Ophidians fear them, and indications are that the Berserkers are only loyal to the Ophidian females – to the point of even murdering their own troops.

Ophidian Berserkers absorb damage much differently than the other Ophidians. They have an inherent magical shielding that is only penetrated by Power, Vanquishing, and Mystic weapons. These weapons cut directly through the Berserker’s magical shielding to deal a certain percentage of the damage a character would have under normal circumstances. Power does the least percentage of damage, Vanquishing a middling amount, and Mystics do the highest. At least 5% of a character’s possible damage is applied directly to the Berserker. However, that 5% does not include the extra damage such magical weapons impart from Item Properties. Appear sporadically in the Terathon Keep Near or after 3:30 am approx 1 hour before server down. Will appear in the inner core around the Brazier. Tested 3 nights, With 70's all armor does 58 60 54 damage. With my character Str 117, Archery 115, Tactics 100, Chivalry 87.5, spell weaving 75.4, Horselord Enemy of one, Consecrate weapon, my damage dealt is 8 constantly, with Horselord only my damage dealt is 4. Enemy of one, recognizes it as a Knight. High luck needed to make it worth the fight. Average gold attained 6000-6826. There movement speed is approx 3/4 silver serpent. Comparison for damage Horselord, Enemy of One, Consecrate weapon, Knight 90 86 90.