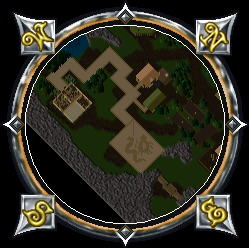 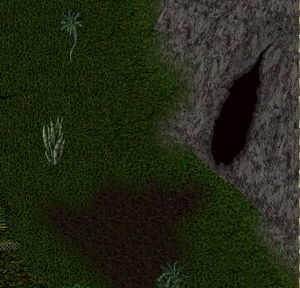 Delucia is a town that is located in the Lost Lands. The only settlements in the Lost Lands are the relatively small Delucia and the even smaller Papua. The town was first introduced into gameplay in 1998 with UO's first expansion. For the most part, Delucia is a town much like any in Britannia. The quickest route to the town lies in the mountains to the south west of Trinsic via the Delucia Passage (Coordinates 149° 9'S 21° 35'E).

Delucia is host to the following NPC shops: Bank; Mage Shop; Smith/Weaponry Shop; Provisioner; Healer; Stables; Inn; and Tailor. Like Mistas' Meer and Juka, the town square depicts in flagstone a Terathan and an Ophidian engaged in combat, when viewed from above.

The next expansion also included lore on the first:

The city of ruins, as some may call it, lies in the south-west corner of the Lost Lands. It can be reached by foot quite easily by those who are not afraid to fight a few mongbats and giant spiders in the dungeon leading to it. Delucia lies well protected between large mountains and palisade walls. Miners and Smiths will most likely find this a good place to live in. There are a lot of mountains within the range of the guards protection, and the local armorer has a forge to smelt ore in. Around the city there are deer, cows and even horses grazing the grassy lands. Inexperienced warriors have enough to hunt on, and tailors will be pleased with the amount of hides the hunters will bring back to the village. Tailors will also be pleased with the cotton field in Delucia, cotton can be picked and turned into spools of thread or sold directly for gold. Delucia also has stables to leave your pet when you need to travel back to Britannia. The fields in Delucia spawn turnips and lettuce, enough to keep your pets happy. The local bank, mage shop, provisioner and healer can aid all adventurers who decide to make Delucia the start and end point of their adventures.   -- Playguide: Ultima Online Renaissance.