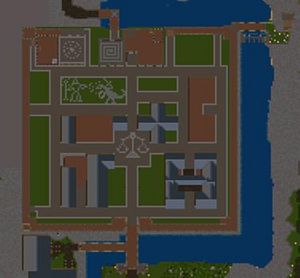 The Ruined City of Mistas

One of several, Mistas is a ruined, formerly great city located on the Facet Ilshenar. The closest Moongate is Honesty. The current occupants are:

All of them are evil beings affiliated with Lord Blackthorn and his time machinations.

Mistas currently serves as a rallying point for the Serpentine Passage entrance into the Ankh Dungeon. Regularly, travelers are seen leaving the North exit of Mistas as they seek out Centaurs, which are often farmed for arrows, and the lairs of Serpentine Dragons.

The city does not pre-date the hostilities experienced between the Meer and the Juka, as evinced by the flagstone mosaic to the Northwest of city-center. However, the conflict was not central to the builders of Mistas. The city is built around a large flagstone mosaic of a set of scales. One popular Internet site suggests the city was once a place of Justice. Sadly, they miss the full implication of the subject depicted.

The function of a scale is achieved only when an unknown is opposed by a known, in other words, when balanced. Balance is the sole reason for the existence of scales. And the builders of this once great city placed balance at the center of their society. Certainly, justice relies upon balance, but those who pursue balance unwaveringly can also commit quite unjust acts. No, this was not an analog of Yew; Mistas was the locus of balance.

To be fair, balance was valued even by participants in the Juka and Meer hostilities. When the Meer Eternal, Adranath, reflected on his nearly successful destruction of the Juka, he rued his folly in abandoning the tenets of balance. It was only because of the overwhelming forces that Adranath had assembled that the Juka called out to Exodus for time. And as we all know, Exodus took that opportunity to manipulate timespace and deliver the Juka to Blackthorn the Deceiver.

Digressions aside, Mistas is neither a Meer nor a Juka city. Neither race would depict the other in flagstone, at least not as upright, uninjured, and armed, as in the Northwest mosaic. It is difficult to imagine Mistas being an Ethereal city, as well. The only existing Ethereal structure is Reg Volom. Experts agree that the architecture is so divergent between the two as to preclude an association. 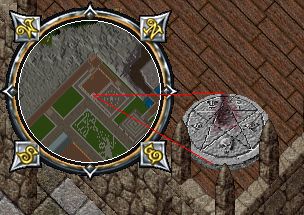