New Haven is the intended starting city for all new characters. It's a very friendly place with good infrastructure (you will find nearly all types of shops there) and hunting grounds for beginners. Old Haven is still located to the east, but it is inhabited by undead now. On most shards New Haven is visited by veteran players so it's easy to get help if you have problems. 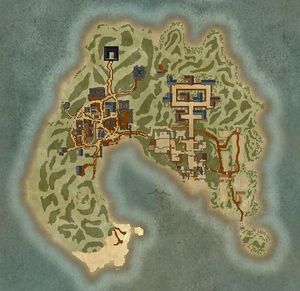 A map of New Haven (west) and Old Haven (east) together. Click for a larger version

The bank (and the area in front of it) is a good place to meet other players. In the evening it is usually very crowded there. The moongate was once located on the peninsula at the southeast end of the isle. It has since been moved and is now located on the southwestern edge of town, near the carpentry shop. An arena has been added to the island where the moongate used to be. Be careful when you venture there, because the farm on the way has been overrun by brigands.

The land on the southwest is inhabited by various animals. It is a good place to train taming or to hunt for various resources like hides and logs. There are many mongbats there that are good training for novice players. If you feel stronger, you can hunt the ettins in the wood near the south coast. There are always a handful around and they give good money (about 200 gold each). From time to time they drop nice beginner items.

Most trainers offer New Player Quests that require that you gain 50% in the skill they train. For some of these quests, you can go to Old Haven and hunt undead there for an accelerated skill gain effect (while others might request for you to stay in the trainer's shop, or head to the mountains to the south west). Please note that as long as you have these quests, you cannot buy training from a trainer - You have to abandon the quest and then retake it again after the training. You still get the reward at the end, which is mostly a very useful item. For example, for the necromancy quest you get a fully-filled necromancer spellbook.

Another type of quests are the escort missions. They are given by various NPCs in the wilderness and on the streets of New Haven, who usually announce themselves when you pass by. You just need to escort them to a specific shop inside the town. They give you 500 gp as a reward (just wait a few seconds after the arrival, then the quest resolves). There is a five minute timer on these types of quests, but it's still a good way to make money.

New Haven emerged in the wake of the destruction of "Old" Haven, presumably at the hands (intentionally or not) of Blackrock traders who offered great rewards for players' Blackrock.

The citizens of New Haven, in particular their Mayor (who is found in a building near the bank) assert that their town's quick rise from the ashes of "Old" Haven is due to their (the New Haven-ites) being time travelers. Whether this is accurate or not, and what if anything may come of it, remains to be seen. The Mayor refuses to give any more details, due to fears of corrupting the timeline.