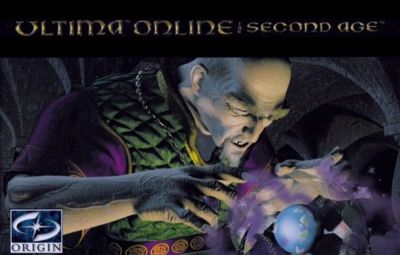 Mondain from the back cover of The Second Age box, circa 1998.

Mondain was one of the primary NPCs in the history of Britannia. An evil mage, he is long-dead, though his legacy is still felt. Please see the fiction behind the Mondain's Legacy expansion for examples.

The destruction of his Gem of Immortality is the fictional explanation for the different shards of Ultima Online. The IRL reason was server capacity.

The young Mondain was born somewhere in the lands of Sosaria. He was the second son of the powerful wizard Wolfgang, king of the City-State of Akalabeth. King Wolfgang tutored his son in the ways of magic.

As Mondain's knowledge of the arcane arts of magic grew, he wished more and more to gain his older brother's inheritance. He therefore began to experiment with his power over minor creatures by controlling their minds and actions. Mondain could even kill them without compassion. His strange ways were noticed and became a constant worry to his father. When Mondain was fifteen, his father decided to act.

"Thou shalt take a year off from magic, Mondain. To improve thine attitudes and develop thy virtues,"- Mondain's father said, "I have arranged for thee to live with the brothers in the abbey, where thou shalt practice compassion and humility. Learn thy lessons well, my son and this ruby gem, which harnesses the power of the sun, shall be thine."

Mondain had other plans, though. And not even his father could stand in his way. The next night he slew his father and took the gem, for he hungered for power. Mondain then began to use his father's gem against itself to produce a black jewel that would render him and his evil immortal. He named this jewel the Gem of Immortality.

As his power grew he gained more control over the minions of darkness. He created many strange, hybrid creatures in his dark laboratories, including minotaurs, lizardmen, orcs and goblins.

He and the young British, Champion of the White Light, had an epic battle deep within the labyrinth of dungeons, where he was defeated and driven away from the kingdom of Akalabeth. Thus British received the title of "Lord British, Protector of Akalabeth". Such a defeat would not be forgotten by Mondain.

Mondain called for all the dark creatures along the universe, even an alien race from another universe responded the dark wizard. The few who escaped their grasp talked about some part tiger, part human creature with some powerful wands of strange fire. Terror invaded Sosaria, and Lord British's plans for unity became more and more appealing. But even the hope and will of the people of Sosaria could not withstand such a threat.

In their darkest hour, Lord British summonded a champion - the Stranger.

Mondain intended to conquer the world of Sosaria. Fortunately, the Stranger, who would become the Avatar, destroyed the Gem of Immortality, which kept Mondain alive and slew him before all of the world was conquered.

Nevertheless, something strange happened, which has never been explained in the series. Three of the four continents of the world apparently disappeared after Mondain's death. Some form of magic prevents anyone from arriving at the other continents. Sometimes lost ships arrive from the other continents, to never be able to go back to where they came from.

In Ultima Online, the consequences of the destruction of the gem are different than those in the single player series. Its destruction caused Sosaria to be divided into many planets which are copies of Sosaria. All these planets became "shards" which are servers of Ultima Online.

The wizard left behind his apprentice and lover, Minax (villain of the second game), and their offspring Exodus (villain of the third game) as well as the shards of his Gem (created the Shadowlords of the fifth game) and his skull (destroyed in the fourth game).

Mondain was also used by the gargoyle race as the physical embodiment of the virtue Control.