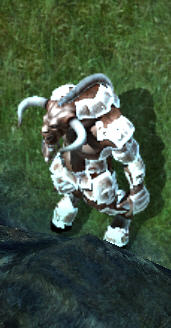 A creature derived from Greek legend, in UO minotaurs have the unusual ability to charge. For a short period after they are damaged their movement speed increases radically, to the point that a mounted character can only just pull away from them. Trying to avoid them on foot is nearly impossible. Fortunately they lose this ability after several seconds, though it will return if they are harmed again. When reduced to nearly zero health they will also use this ability in defense, sprinting away before returning after having healed up a bit. In both circumstances a ranged attack is strongly recommended.