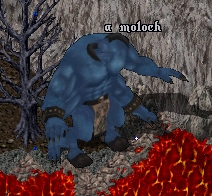 The Moloch is a blue, demonic creature with several arms and powerful physical attacks. It is also the form taken by Necromancers when they cast the Horrific Beast spell. Confusingly, "Moloch" is also one of the Daemon names.

This monster appears to bear no relation to the Demon of Corruption found variously in the fiction of the television show "Buffy, the Vampire Slayer" and in various mythologies.