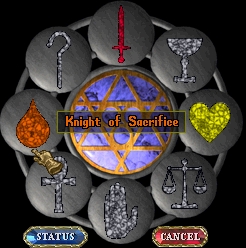 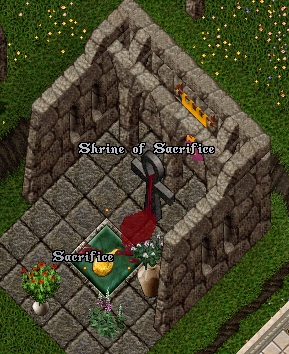 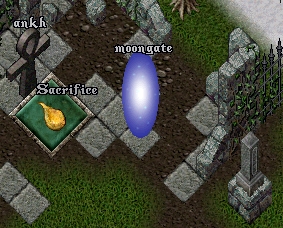 Sacrifice is a Virtue, a Moongate of Ilshenar, and a Shrine.

Sacrifice is a Virtue that is gained through sacrificing all of one's Fame to a monster in order to redeem it. The monster will then recognize its wrong-doing and vanish into thin air. The monsters you can sacrifice to include Demons, Enslaved Gargoyles, Evil Mages, Gargoyle Enforcers, Liches and Succubi. In order to sacrifice to a monster it has to be completely unharmed. You also must have a minimal amount of fame, which is greater than 2000, probably 4000 total.

Sacrificing may only be done once per 24 hour period. You have to be at least "Great" to be able to sacrifice - the higher your reputation level, the further you advance on your Virtue path. Sacrificing a Lord/Lady title will yield far more progress than just a Great or Glorious status. Also, the more powerful a monster is you sacrifice to, the more you gain. You will have no fame remaining after a successful sacrifice.

Once per week your Sacrifice level will drop by a small amount automatically.

Alternatively, a small amount can also be gained by completing the quest given by Grizelda the Hag. Completing the Hag's Quest a few times a week will counter the weekly losses in Sacrifice, so that you don't have to lose all your well earned fame regularly.

The reward for your sacrifice is the ability to Resurrect yourself. For each level you reach on your way, you will be able to do so once a week. Thus as a Knight of Sacrifice (level 3) you can resurrect yourself 3 times a week.

After resurrecting yourself you will find all your belongings back in your backpack, except for any items that were looted in the time it took you to resurrect. The items will not be returend if you crossed a serverline (e.g. walked out of a dungeon) before resurrection. A message will warn you if this is the case.

It is wise to only use this ability when in an emergency. You will not lose any virtue by doing so, but only one of your weekly resurrections.

The shrine is located on the main continent (117°15'N, 142°44'E). It is a fully functional shrine; a character may lock his or her karma, be resurrected, or even tithe gold there.

Wearers of the Ankh Pendant who chant the word "Cah" at the shrine will receive an increase of +1 Hit Point Regeneration and +1 Stamina Regeneration, with a 50% chance to get one of those further increased to +2. The effects last for one hour. A character need not continue to wear the pendant to maintain the increase for that time.

The Sacrifice Moongate (29°42'N, 10°28'W) is located in a cemetery near the Meer town of Lakeshire. Non-mages have been known to frequent this moongate as it is close to a brigand camp with a rescue quest. It is nearby the Rat Cave.

Sacrifice is one of the Virtues in the moral system of Ultima Online.