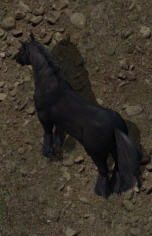 The mounts of the Calvary of the Fallen are nightmares. With their riders, they are fell beasts, killing at the behest of their masters. Without a hell-wrought bridle, nightmares serve only their own wild lusts and rages. Unlike normal horses, nightmares are intelligent and use their form, that of a normal horse, to confuse the unwary. Able to snort fire and rend flesh with their savage bite, a nightmare should never be approached as a mount, lest the rider is prepared for the longest journey.

A popular mount for Tamers. (Animal Taming) They are very aggresive, and like a Dragon have the ability to breath fire.

While pre-Publish 97 nightmares always spawned with a requirement of two control slots, fresh tames now require either two or three control slots. Data gathered from 94 nightmares in the Ki-Rin Passage on Europa (April 26th 2018) suggests that the spawn rate of two-slot nightmares is about 30%. Although both the two and the three slot variants were seen spawning with similar Hit Point values, ranging from 298-315, there was a considerable difference in their Strength values. Two slot nightmares spawned with 251-319 STR, whereas the three slot ones were seen with 309-524 STR.