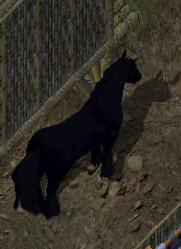 A ridable mount that requires 3 control slots, similar in appearance to a Nightmare yet slightly more powerful then a Dragon.

These were originally seen with Vanguard Controllers astride, during the Vanguard invasion of 2008. Killing the rider left the steed available for taming.

During the early stages of the invasion a far easier method was to throw a bola at the Controller, causing him to fall off. The mount could then be led away to a relatively safe location and tamed there. Eventually a change was implemented which caused the warhorse to disappear if the Controller was dismounted before death.

Saying "trick" causes the steed to cast an area effect spell of unknown effect; this creates a large black cloud on the screen (only visible in the 2D client. 3D appears as fire around horse). One rumour was that it affected The Six.

(The symbol:+/- shows the attributes of a few in game creatures. It does not reflect the entire possible spread.)