Also known as "The Strangers," The Six were powerful creatures that spawned during the Summer of 2008 as part of the The Vanguard Chapter of the Warriors of Destiny event cycle.

Their purpose, who they work for, and other key pieces of information are largely unknown at the time of writing (January 2009).

Their names and spawning locations were:

Only one spawned in each location.

They were difficult to fight. They wore dragon scale armor and carried halberds or similar weapons. Their attacks were heavily fire-based, and they could cause pet Dragons to go wild. They would not attack players until attacked themselves. However, their area effects indiscriminately injured player characters, and they were hued red, a traditional means of noting that an NPC is evil or hostile (or both).

The fiction surrounding The Six was purposefully ambiguous as to which side of the conflict they were on. However, they were certainly capable of evil acts, as two of them spoke casually of the pros and cons of committing genocide upon humankind, and one of the murdered several people outside Despise. It did sound as if they might be in search of something.

In many battles they would one-hit-kill Player Characters, and also kill pets extremely fast. Each of them initially spawned with a weapon of limited durability (60/60). When fighting one of The Six with a Mace Fighting character, or any character with a slow damage output, the member of The Six's weapon would reach durability zero well before he/she ran out of health. With weapon destroyed they would fight with bare hands, and begin to one-hit-kill - the damage was well over 100 for a single hit, even when wearing 70 resists. They could also attack in this manner if the target of a Disarm skill attack.

For loot, they left strangely-shaped gemstones and A Magical Lockbox. Opening the box caused all the items within (large amounts of peerless type loot, potentially including all relevant artifacts up to and including the Crimson Cincture) to fall to the ground (where anyone could grab them). The box itself was very valuable and in high demand among players, due to the difficulty of finding and defeating a member of the six - and also the difficulty of picking up the box, which would also be left on the floor. The box would be immovable for a short time after it dropped, often leading to a crowd of PCs trying to pick it up at the same time.

The Six left no corpses. When they were defeated their body would vanish, and the shape of an Ancient Wyrm could briefly be seen. Some of them would smack talk, taunting the characters who had slain them, assuring them that they had not really won. 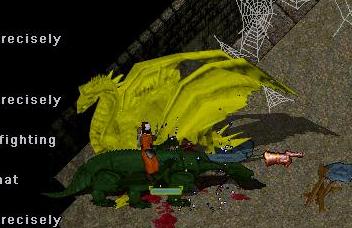 The dragon effect after they died, the effect they had on draconic pets, and their use of fire all suggest that they might be powerful dragons in their true form, but asuming human form for their visit...

They also bore obvious similarities to the Crimson Dragons, who appeared in another Chapter of Warriors of Destiny. The Crimson Dragons cast the same deadly "Vas Flam" ("Rise Flames") spell as the Six, which caused walls of fire to erupt. They also smack talked in very similar ways.