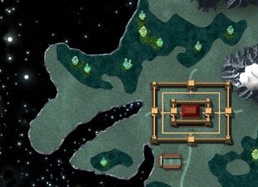 Luna is a city in the facet of Malas (the other being Umbra, the city of Necromancy).

Known as the "City of Paladins," Luna is located in the northwest corner of the landmass and consists of a central hub that is surrounded by paths and walls made of sandstone, like those found in the great Britannian city of Trinsic. Various merchants sell their wares from within the safety of the building that lies at the heart of the city, and Keepers of Chivalry patrol just outside, keeping the residents safe from shady characters and those who would disrupt their virtuous way of life. An open, grassy area that is not protected by the guards separates the center building from the outer wall, leaving plenty of room for the city to grow.

Along with Trinsic, it is associated with the Paladin profession. While it holds the title of the Paladin City, there are far more NPC Paladins in Trinsic.

The Chivalry skill can be learned there.

Luna's Mayor is corrupt and will give out various disturbing Quests, such as acquiring elf ears or pixie legs. (See Gorrow the Mayor.)

Player housing is allowed within the walls of Luna (though outside of its guard zone). On most shards, Luna has become a center for player commerce.