Unconfirmed anecdotal reports indicate that the loot from Ilhenir the Stained is the same as found on the Monstrous Interred Grizzle, the Peerless of Bedlam, which also looks highly similar to Ilhenir. The Grizzle is fought far more often than is Ilhenir. Most players consider it easier to acquire the keys for it than to fight their way through Ilhenir's spawn.

To enter the Champ area, go into the graveyard, open the Mausoleum gate, and go down the stairs. 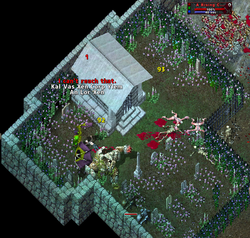 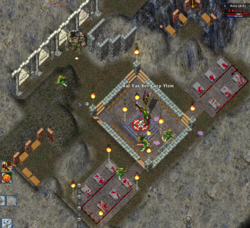 Be careful in the altar area, as there are only a few places you can go up the steps to exit the pit. It can be easy to be trapped in the corners.