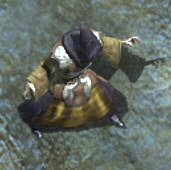 In ancient times, Kaltivel, Anshu, Maliel, Baratoz, and Almonjin, were formerly the five most dreadful necromancers in the cabal who worshipped in Khaldun. They are now ressurected as fearsomely powerful liches in order to defend their underground temple from archaelogists and other adventurers who seek to claim its riches.

Ancient Liches were originally found only in the dungeon of Khaldun, located in the Lost Lands of Felucca. In more recent times, they have started to spawn in the hidden area of the dungeon, under the Ethereal Fortress. (Ilshenar). Paragon forms of the Ancient Lich also spawn there. The normal form of these monsters is deadly enough.