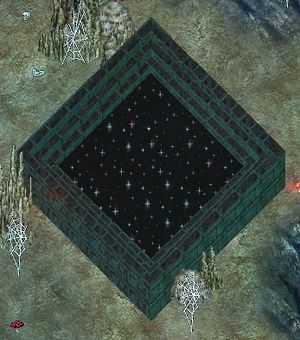 The Void Pool is a special spawn location inside of Covetous level 2.

"When she attempted to wrest knowledge from the Codex of Infinite Wisdom, the sorceress Cora broke loose a section of the great book's altar. Floating through the void between places, the section of magic stone slammed into the shard inside Dungeon Covetous. Trailing behind it is a portal through the void that leads to the Codex itself.

Now, Cora has assembled an enormous army of minions to take control of the Void Pool, so that she may once again attempt to steal the knowledge she seeks. Unfortunately for her, she cannot cast magical gates too close to the Void Pool, and she does not have the means to send more than a few minions through at a time."

Players need to defend the Void Pool from Cora the Sorceress's minions. Cora will invade the dungeon with endless waves of monsters, each wave being both tougher and faster than the previous ones. These minions appear from one of the following groups in this order:

Cora's minions do not drop loot and instead players score points for making kills or assisting in making kills. The total and the current scores can be seen by selecting The Void Pool option from the character's context menu.

Reward points are received at the end of the invasion round based on the number of waves the players helped to fight back. These reward points can be redeemed by visiting Vela the Sorceress in Cove for Covetous Void Pool rewards.