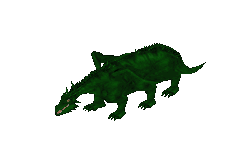 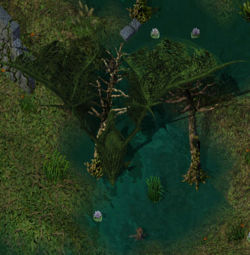 In 2002, Lord Blackthorn's Revenge [1] introduced several previously unknown creatures, including the Swamp Dragon. Related to Dragons, the six-legged creatures first appeared during Blackthorn's attack on the City of Yew, when mounted Chaos Dragoons rode Swamp Dragons during their invasion of the City.

Chaos Dragoons can still be found near the Ilshenar moongate of Honesty. Killing a Chaos Dragoon causes him to fall from his mount, thus leaving a Swamp Dragon that can be tamed and then ridden by players. Animal Tamers must have a minimum skill of 93.9 to tame a Swamp Dragon - Despite this, once the taming process is complete, any player can command or bond with one regardless of their skill level.

Swamp Dragons are a popular choice for those who engage in PvM combat. They can be equipped with armor through the use of a Dragon Barding Deed. The armor blocks 10% or 20% of damage dealt to the rider, depending on whether the armor is of normal or exceptional quality. A special version of the mount, Paroxysmus' Swamp Dragon, comes with a permanent set of armor equipped which blocks 12% of damage.