The clock comes in three versions to choose from, from left to right: 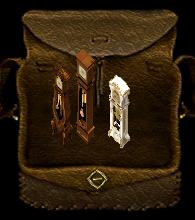 Then a large brownish colored one named "Large Grandfather Clock".

And the white one is called "White Grandfather Clock".

The clocks have animations of their pendulum when locked down and chime on the Sosarian hour(every 5 real-world minutes). Extended chimes sound at noon and midnight.

Upon release, there is a bug where the clock chimes will be heard by some players, no matter where they are, if the clock is left in their bankbox or a container in their home.