The Guaranteed Gain System, or “GGS,” provides additional opportunities for skill gain alongside the basic skill gain system within Ultima Online. Although it may benefit every player at one time or another, those who play infrequently and those who suffer from consistent bad luck when attempting to increase their skills may find it especially beneficial.

UO’s basic skill gain operates as a “use-based system,” and each time a character successfully uses a skill he or she has the possibility of gaining in that skill—sometimes the character will gain skill, other times not.

GGS tracks each successful use of a skill, and whether or not skill points were gained in the wake of that success. If no skill points are gained over a given period of time, then GGS will award the character a minimum skill point gain as compensation.

It should be noted that if you use a skill and fail, GGS will not come into play. Characters will only be able to gain skill after having successfully performed an action—GGS simply improves the odds that you will gain skill points with each successful skill use.

Characters will still be able to gain skill points in the normal use-based fashion—GGS will simply be keeping track of how long it has been since you had gained a point of skill and award you a mandatory point (as in 0.0 to 0.1) if you had not gained your own after a certain period of time.

GGS Timer: The length of the time period, or “timer,” between 0.1 skill point gains is based on the level of skill; the timer will increase as characters achieve a higher total of skill points.

If the time period passes and you do not gain skill points through the regular use-based method, you will gain a point thanks to GGS. GGS time periods are based on the server system clock, meaning that you don't have to be logged in for your timers to refresh.

For example: You cast a spell of moderate difficulty, and succeed, but you do not gain skill. If you continue to succeed in the use of the skill but the relevant time period passes and you have still not gained a point in that skill, then you will gain a point in that skill the next time you successfully use that skill.

The chart below may be used as an estimate of the amount of time that may need to pass (after multiple consecutive skill-use successes without skill point gains) before a character will see a raise of 0.1 within the noted bracket due to GGS, and NOT how long it will take to pass through the whole bracket. Please note that these time periods are not to be used as an absolute rule, but instead as a general guide—as the saying goes, “your mileage may vary.”

For example, a player with a total of 700 total skill points and 82.3 Blacksmithy has been practicing his craft for some time, but has been failing steadily hasn’t noted any skill gains. We can cross-reference the “80.0 – 84.9” row with the “700 total skill points” column and see that if this pattern continues for a total of 15.0 hours GGS will compel a 0.1 gain, making her Blacksmithy raise from 82.3 to 82.4.

GGS affected by the difficulty of the task: The most noticeable difference between GGS and previous skill gain systems or incentives is that gains for skills that score in the 90s, for example, are not only possible during normal or casual play, they are guaranteed—provided you are successfully performing your skill in or around your current skill level.

An example of “performing at your skill level” could be someone casting Magic Arrow with a Magery skill of 90.0, which would provide no chance whatsoever to gain skill in Magery even considering GGS, as that spell is of too low a spell circle to be challenging for someone with that high a Magery score. You would need to cast higher circle spells to see guaranteed skill gain. Similarly, crafting daggers with a Blacksmithy]] of 80.0 would provide no chance to gain skill in Blacksmithy.

Skills that are not difficulty based, however, would always have a chance to gain (without concern for the challenge level of the task being attempted). 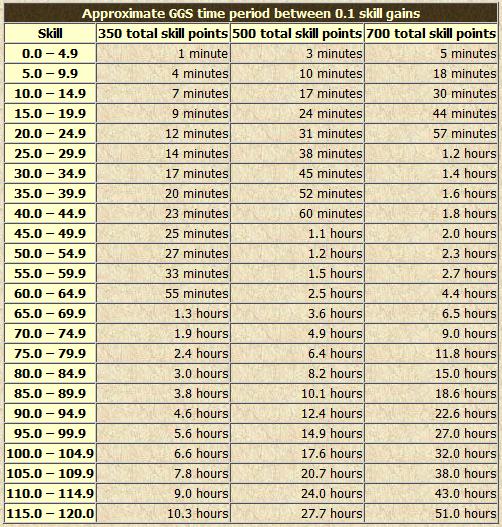 Retrieved from "https://www.uoguide.com/index.php?title=Guaranteed_Gain_System&oldid=24611"
Britannian Date May 31, 410