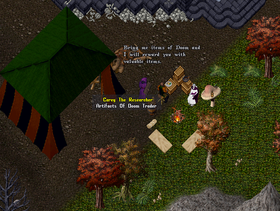 A new camp has appeared outside the entrance to dungeon Doom.
‎Learn all about the fun activities available during this year's Halloween season.

They return once again. Visit graveyards throughout Britannia and slay the Butchers to have a chance at a Pumpkin Carving Kit. Carveable pumpkins can be harvested in fields across Britannia. Watch out for the Grimms as you try to harvest a pumpkin. The chance of a Grimm having a carveable pumpkin on its corpse is about 1 in 5, based on a few tries in the many pumpkin fields near Britain. 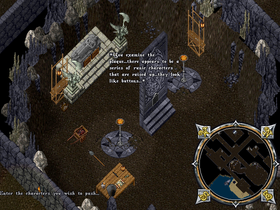 What code do you need to enter?

Nolita the Professor and Carey the Researcher have setup a camp at the entrance to dungeon Doom. They were excavating the dungeon and had uncovered some previously unknown ruins. Monsters have "suddenly" starting carrying artifacts. Slay monsters to collect the artifacts and trade them in for different rewards. Bring the artifacts back to Carey at the camp.

Build up points by turning in artifacts you loot inside the dungeon. You can select from the following:

You can use the Inscription skill to create Prophetic Manuscripts to try and decipher information about the newly uncovered ruins.