The lone shepherd walked the road towards Moonglow, stopping occasionally to lean upon her crook and survey the herd of sheep traveling alongside her path. She reached out with her crook to gently nudge a wayward ewe back toward the pack, nodded quietly, and continued on her way.

Herding allows players to direct the movement of any tamable creature. They can either be moved to a specific location or made to follow your character indefinitely. Unlike conventional pets there is no known limit to the amount of herded creatures you may have following you at one time, though they won't travel with you through moongates.

Herded monsters may still decide to attack nearby characters, however it is possible to herd while remaining hidden. A stealthing character can potentially escort a very large group of dangerous monsters (though their movements will likely give away his location to nearby players).

Your chance of success when giving an order is equal to that of your current skill level. The taming difficulty of your target creature has no effect and there is no wait time between attempts.

Area effect peacemaking will stop creatures from following you. 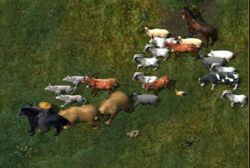 To use your Herding skill to herd animals:

If successful, the animal moves in the direction you intend. The Herding system messages are as follows: