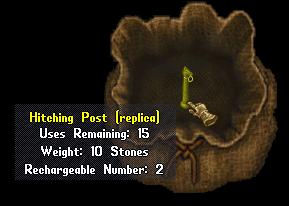 As of Publish 57, the Hitching Post (replica) is craftable through the Tinkering skill. It can be locked down in player homes and provides the same functions as going to a stable, where a player can claim and stable their pets.

It starts with 15 uses and a Rechargeable number of 2 which decreases each time it is recharged, indicating they only have a maximum of 45 uses before a new one is needed. Unlike the "full" hitching post, which can now only be acquired with real-world cash through the official UO Store, the replica uses a charge both when claiming and stabling a pet. The full version must still be recharged with a Hitching Rope (see below), but it holds 30 charges at a time, can be recharged an unlimited number of times, and only uses a charge when claiming a pet.