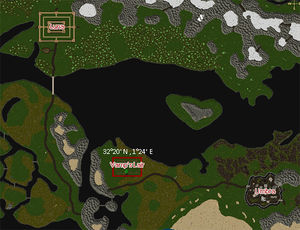 As you first walk into the building, you find yourself in the tavern, more often than not staffed by Edwin McCormick. Be sure to say hello. Here you can take a stool and order up a fresh mug of our finest collection of worldly ales, liquors, and brews. We famously house our own private labels --- Pandora's Perfect Pinot Noir (Red Wine) and Lair's Red Mist (Red Wine Spritzer). We also are surely to stock some of the land's best known labels such as Olympus Rum and Aegis Brandy. Some of our lesser known items on the menu hail from a collection crafted by our half-breeds skilled in Mixology... but that's a secret you would never know. Many come on Thursday evenings from far and away places to enjoy their time at the Brew.

The Tavern Bar is located on the first floor of the building. Outside is a small stable for your mounts and pets to happily feed and drink from the trough, as no mounts or pets are allowed on premises. Just outside there is a teleporter that will take you to the Trade Center, just outside of Umbra.

The Distillery is where our Mixologists and Brewhands carefully craft our house labels. Open only to those with a key, the distillery offers a tasting room for special guests.

Should any of our guests be too affected by our selections, they are offered a stay in our small, quaint inn, which features a guest bathroom.

The rooftop lounge is one of our favorite places to relax and have more private conversations. You and your beloved can sit under the stars in a much more intimate setting. 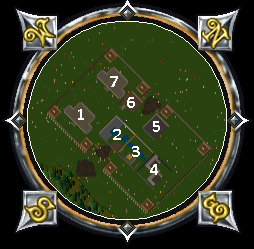 The Bloody Brew is located in the heart of our player-ran city, Vamp's Lair (known publicly as just The Lair), a player-ran city owned and operated by the Children of Darkness guild. It is building number 6 in our overhead diagram to the right. The other buildings surrounding the Brew, as its affectionately called, are: The City Court and Jail, The Encyclopedia Britannia, The Millennium Nightclub, The Church of the Sun, the Reprieve for Resting Souls, and the guild's headquarters, The Dark Tower. Vamp's Lair is conviniently located in the abandoned orc fort just east of the Malas Mountain Pass, a short distance from the city of Umbra.

The Bloody Brew Tavern was erected on July 16th, 2010 (a resurrection from the previously known tavern in Felucca that had been erected on December 20th, 1997 in the Vamp's Lair city of Felucca). We named the tavern in honor of one of our members, Pleb --- who hails from the U.K. --- and we make him say "Bloody Hell" in Ventrilo; a small price to pay (hehe). The original tavern was on the first floor of our Vamp's Lair "castle mall" in East Britain on Felucca, before Trammel ever existed, so it did not have its own name, it was just part of the castle. The Children of Darkness resettled in Sosaria (after an 8 year hiatus, playing other MMO's) on January 2010 and worked on acquiring the land to rebuild their famed city, once again. Finally the tavern could have its own building, thus would have its own name.

Thursdays, 9 PM to 11 PM EST --- Open to all RP'ers of the shard serving a wide variety of imported liquors as well as Olympus Rum, Aegis Brandy, and our own private labels --- Pandora's Perfect Pinot Noir and Lair's Red Mist. Vampires can order speciality brews, mixed by our half-breeds with their talent "Mixology", that contain a variety of blood pathogens from different sources --- from dark elves to the rare AB- typed blood imported from Earth.

Edwin McCormick is the resident tavern manager. He is very friendly and very intelligent with an astute business sense. He has been with the coven for over 200 years now, having been born in the city of Devonshire, England back on Earth and made a vampire by a rogue sire that left him on his own. His apparent age is that of a man in his late 30's or early 40's, fair skin with blonde hair and sharp blue eyes, very fit and toned build. Nothing about him screams "vampire" and he has accustomed his palette quite well to many drinks and even some food. His tolerance of such things helps to keep his true nature hidden very well. In fact, even vampires have a hard time pegging him for one of their own.

He has had many lovers throughout the centuries, but keeps to the company of men preferably. He's a shameless flirt, however, so do not be surprised to see him hit on some of the more prominent, handsome male visitors to his bars, much to the detriment of Gabe the barkeep at the Bloody Brew. Being tall and handsome himself, not to mention the sound of his British accent, it is also not surprising to see visitors hit on him as well, although the females might face a harsh rebuttal.

He is grateful to the leaders of the Romanus Family for the teachings that they have provided those that they bring into the family and is fiercely loyal to them. He maintains the Bloody Brew open the other nights of the week for any would-be traveler. He employs the other staff members and runs an entire chain of taverns throughout the Kingdom, all owned by Romanus Holdings, Inc.

All of our vampires, half-breeds, and lycans are under the complete facade of the masquerade (hidden from true view). No player can "sense" or otherwise absolutely know for certain that we are downworlders, unless shown to be so.