With Stygian Abyss, the players will be able to complete a short quest-chain Shearing Knowledge that allows them access to a special vendor’s inventory of carpet pieces. Each carpet piece can be placed inside a home and locked down in an intuitive, simple manner that doesn’t count against their total lock down count. Double-click on the carpet piece to lock it down. Repeat to unlock.

These carpet tiles use older, existing art that hasn’t otherwise been available to the players. This idea was originally attempted in a system that Michael “Vex” Moore wrote in 2001, which was in turn inspired by "Dermott"'s idea for vendor-sold floor tiles, but was never used due to potential exploits and complications. The goal of this system is to sidestep the issues that the earlier implementation might have caused, and introduce the carpet tiles in Stygian Abyss through a quest requirement. 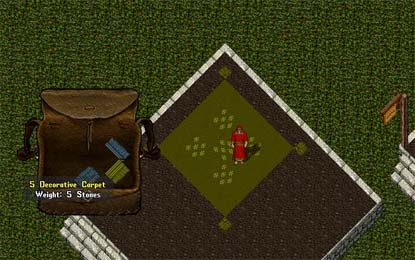