Blacksmith Bulk Order Deeds were introduced November 30, 2001 via Publish 14. A character only needs one-tenth of a skill point in Blacksmithy to be eligible to receive a BOD from an NPC. Different BOD types are given out according to skill, but lower level characters can receive BODs more often. The wait time is reduced to nil if you've just handed a BOD in - One technique for collection is to have your low characters receive a large collection of "easy" BODs, fill them all, then have your high level Blacksmith return them all so as to receive a large amount of "hard" BODs quickly. 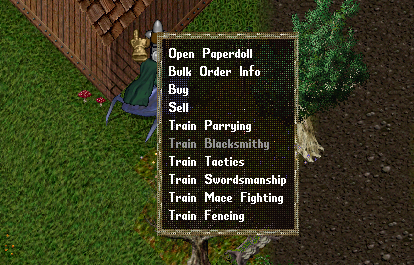 If you've noticed a remarkable similarity between this page and the Tailor BOD page, it's not by accident. This page was begun by shamelessly copying from and modeling upon that fine document. Credit goes to JC the Builder for his original creation!

Retrieved from "http://www.uoguide.com/index.php?title=Blacksmith_BODs&oldid=69885"
Category:
The Powerhour