Difference between revisions of "Glass Sword"

Glass Sword is a weapon which takes up the Right Hand Slot and can only be used by Gargoyles. This item is different from the original Glass Sword (see the History section on this article). It is introduced with the Stygian Abyss expansion and can be crafted through Glassblowing or can be bought from the Npc Blacksmith gargoyles in Royal City, Ter Mur.

Glass Sword that is exceptionally crafted will receive a bonus that is further boosted by your character's Arms Lore skill. They are crafted by alchemists who are specialized at glassblowing. Their durability can be increased, via Powder of Fortifying, to a maximum of 255. If crafted exceptionally, they can hold their maker's mark.

Glass Swords are used by blacksmiths to craft Crushed Glass 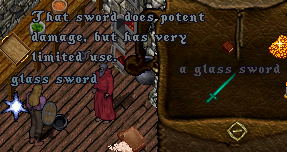 The original Glass Sword is a Longsword known as the "Ultimate Weapon" which can kill any target with a single stroke. Though as it is not crafted of the most durable material, a single stroke is all it is capable of.

Starting with Ultima V: The Warriors of Destiny, Glass Swords were rare weapons kept in reserve for the tougher battles. In some instances, they were the only method available to slay certain creatures. When forced to fight the Shadowlords, a Glass Sword was the only weapon that could temporarily incapacitate (but not slay) the foul creature.

The Glass Sword currently only appears in the Ultima Online demo (included with The Second Age), where the player is handed one in order to slay a Dragon.

The effects of Glass Swords were easily seen when the 2008 on-line event of the Royal Council Massacre was investigated. The Council Chambers were not only littered with dead bodies, but also with shards of glass. Assasins breached the Council Chamber's security and evidently slew the members with Glass Swords.

Retrieved from "http://www.uoguide.com/index.php?title=Glass_Sword&oldid=63508"
Categories:
The Powerhour