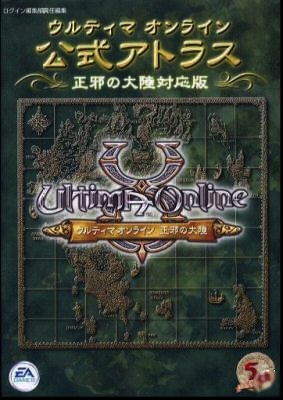 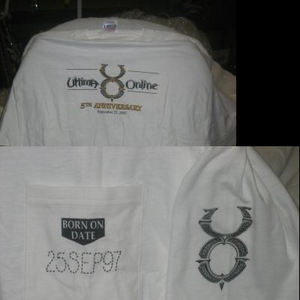 On September 25, 2002, Ultima Online celebrated its fifth year of operation. The holiday was accompanied by the release of both in-game and IRL items.

The 5th Anniversary decorative cakes came in a variety of colors. In a post on the now-defunct official message board, developer Vex explained how each color was selected:

Regarding cake color, there are in fact two factors involved: fame and karma. The cake hues available are the same ones in a normal dye tub.

First, a random column from the dye tub colors is chosen -- there are 20 to choose from. There is an even chance of any of those 20 hues.

Next, the character's karma is factored in. The karma scale is divided into ten rows, each corresponding to a row on the dye tub color selector. This is the hue saturation. The lower the character's karma, the lower the row selected, and the more the hue is blended with gray. Only characters with the absolutely worst level of karma get the grey cakes, and only characters with the absolutely highest level of karma get the most saturated hues.

Finally, the fame level is factored in. There are five levels of brightness, corresponding to the level controlled by the brightness slider on the hue selector. At the low end of this scale (corresponding to lack of fame, for cake color selection), the brightness level and contrast of the hue is low. These hues have a great deal of color but some of the detail of the image is lost. At the other end of the scale, the hue is high-contrast and is also blended with a bit of white to further increase brightness. On the cakes, these hues come out looking pastel and best show off the details of the cake graphic.