BNN: The Principle Pieces - Part I

In his lab, Nystul sat. Buried deep in a leather-bound tome that had the appearance of timelessness. He picked the book up and slowly closed it, as if taking care not to injure it. The book had a mild blue gleam to it as if it was charged with some magical power. Some might say that it was. The Book of Truth, rarely seen, let alone read by anyone, had been brought to Nystul earlier that day. It normally rested in the Lycaeum, though no one could see it unless they knew just “how” to look, for it is kept out of phase with the normal world.

Nystul gave in to a smile, thinking of the look upon Anon’s face when he found that Mariah had simply walked into the Lycaeum, lifted the book from its dais, and walked out. Anon would be furious. Nystul continued to smile. Anon’s anger might be tempered when Nystul finished his mission but, all the same, he would be even more angered by not being involved. Nystul, though at odds with his old friend, could not bring himself to hate the man.

"Some day", he thought, "we will put things right."

Nystul was not an old man by any stretch of the imagination, but he was no longer as young as he once was. Though a more powerful mage than he was in his younger days, each spell now seemed to sap more life from him. He tapped his foot with impatience. He had all but one item that he needed to complete his goal. The last piece of the puzzle should be in the hands of Lord Dupre and Lord Geoffrey.

Nystul looked across the room to where the candle sat. The Candle of Love gave off a soft and comforting yellow light. The candle had been kept secreted in Empath Abbey until the troubles with the Followers of Armageddon began.

“Some day”, he said, “another will arrive to take your place, but never shall you be forgotten, dear friend”.

Nystul put the book down next to the candle. Where the yellow glow of the candle met the blue gleam of the book, a clear line of green flickered into existence.

These objects were the physical representations of two of the Three Principles. The third would be in his hands as soon as his friends returned from Serpent's Hold with the Bell of Courage. The bell required both Geoffrey and Dupre to retrieve. Only Dupre knew its exact location and only Geoffrey could remove it from the dais upon which it lay. Nystul thought of what he was planning to do again.

"This is important,” he thought, redoubling his resolve.

"Dupre! You have brought the bell?" Nystul asked hopefully.

"Nor shall we have that honor, Nystul", Geoffrey said as he stepped past Dupre and into the small room's dim light. 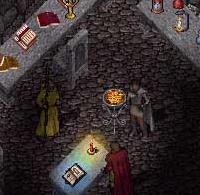 "Shattered", Dupre exhaled and slammed his scabbard hard on the floor.

"Shattered?! But how? No one knew where it was!”

"We found this, left in front of the dais", Geoffrey tossed a bound cluster of raven feathers to the floor.

"That witch! How could Minax have known where the bell was hidden?"

"If only I knew.” Dupre sighed and sat down on a small stool.

Nystul looked crushed for a moment. Then his eyes flickered with life.

"Well that is something we may think upon later Dupre. For now we must find a way to make a new bell.” Nystul walked to his bookshelves.

"Yes. That one must have been forged some how. It didn't just magically appear out of thin air.” Nystul said, gesturing wildly in the air with his hands. "All three of them were made by men’s hands, with the use of magic and power drawn straight from the Virtues themselves. The principles of Truth, Love and Courage outdate most everything in this world."

Dupre looked up, "Then what must we do?”

Nystul smiled, "Get some rest! You both look as if you have not slept in days."

"Both of you get some rest then. I will send some one for you if I make any progress." Nystul smiled and pointed to the door.

The men nodded and left.

Nystul slumped down in his chair and sighed heavily.

"That wretched witch" he mumbled.

His resolve seemed to fade a little now that Dupre and Geoffrey had left the chamber. He looked about. The hour was growing late and he knew he needed to travel first thing in the morning. He stood up and put the book he held back in place and headed off to his bedchamber. Tomorrow would not be a good day. Traveling to Moonglow on Felucca could only mean trouble.