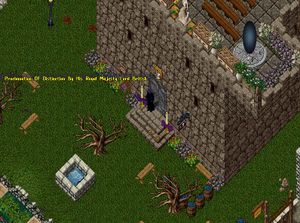 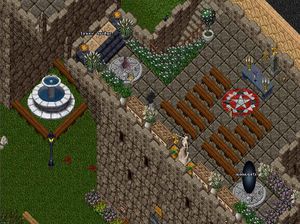 One of the rare remaining GM-blessed player owned structures left on Chesapeake, the Pax Lair Mage Tower is a rare treat. Marked with a plaque proclaiming its distinction, this structure boasts a number of unique embellishments provided by the GMs.

Currently owned by Winfield of Pax Lair (Currently serving as Governor of Pax Lair) the Mage Tower has two plaques on the outside, a brass one that states "Proclamation of Distinction By His Royal Majesty Lord British" and a wooden one declaring "PaxLair Mage Tower: All May come to Study here, but do so knowing that people of all walks".

It has a flower bed permanently placed on the grass outside, a table with a book welcoming all comers to Pax Lair, as well as a fountain, and a number of benches. To the west stands the Necromancer's Tower, another fountain, more benches, and a lamppost.

This tower currently serves primarily as one of the rotating meeting locations for the Pax Lair Statehood alliance meetings.

The Mage Tower was one of the first structures built in Pax Lair, and it was frequently redecorated due to theft by unsavory folks who took advantage of the far poorer security of the time. After touring the Tower, IGM Goatboy/Oberus affixed the first permanent decorations of furniture to the Mage Tower.

The waterfall outside of the tower was actually a tile found by a woman named Callista[1]and it was given to the GM by Lady Winmere. The GM used it to create the Spring of Knowledge in front of the Mage Tower.

Second Chance Provisioners was the second location to get a GM blessing, and was one of the first in-person player-run shops, before the days of unattended player vendors. This was followed by the Alchemist Shop, PaxLair Saloon, PaxLair Survival Shop, and Ladies of the Lair Tavern.

The black moongate and tower bridge were installed by IGM Twilight.

On November 11, 1998, the PaxLair Founders and Builders Festival was held at the Mage Tower. During this event Lord Vargon, Seer Daemeon, and Lord British (confirmed to be Richard Garriott) made a surprise historic appearance, and it was on this day that the plaque was affixed to the outside of the tower to memorialize the unique event.

The Mage Tower and the Necromancer's Tower together have been historically known as the Twin Towers. 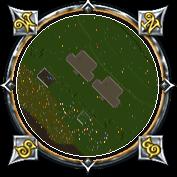