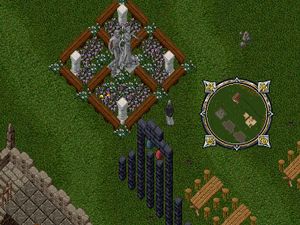 Chesapeake's oldest player-run City, PaxLair was founded on January 19, 1998 in a quiet meadow west of the crossroads of Yew, Minoc, and Britain and the Compassion Shrine on Felucca[1]. It boasts a number of GM blessed structures. Located on the Felucca facet, here you can find structures placed by GMs such as fountains, benches, and on some actual player-owned homes make this a must-see location for any resident of the Chesapeake shard.

Originally a bustling town, this city drew the attention of the Gamemasters for its exceptional commitment to community. In a fit of generosity that is no longer possible, the GMs blessed the city with signs, lampposts, and other decorative, non-functional embellishments to set it apart. With a thriving roleplaying community, this city welcomed citizens of all creeds, including the feared red players. There was a law in PaxLair that was self-enforced by its residents that reds were not to attack blues within its borders, although from time to time it happened anyway.

On any given weekend, you would find people lounging in the pizzeria, dueling in the arena, or practicing magery in the Mage Tower.

The decline of Ultima Online's player base has seen a decline in activity in PaxLair, as well, and these days, you'll find it mostly a ghost town. However, many of the original structures still stand, although some GM-blessed homes have been lost as their owners abandoned the game and let their homes collapse.

It is still currently led by Governor Winfield, who owns the Mage Tower. A gem of history and rare uniqueness, this city has withstood the test of time, although not unscathed. The Statehood of PaxLair is still a thriving alliance, and this unique city has spawned a number of offshoots throughout Sosaria, from Malas to Tokuno Islands. 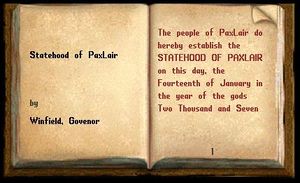 Created on January the 14th, 2007, the PaxLair Statehood united a number of player-run cities, led by mayors, in the same mechanical alliance led by Governor Winfield.

According to the book entitled "The Statehood of PaxLair" as written by Governor Winfield: "The STATEHOOD OF PAXLAIR is a community of people working together in the spirit of respect, creativity and the pursuit of companionship."