Have you ever noticed the large, empty Counselor's Guild halls that are located in most major cities? Well, during certain times of the day they used to be filled with Counselors. A Counselor was a player volunteer who served as both a community liaison and the initial level of in-game customer service.

Though their positions were voluntary, participants in the program received a free UO account. To be fair however, most volunteers who received such an account also paid for one or more accounts on their own. In addition to the free account, the top 15 or so volunteers also got a monthly $500 "thank you" from then-owner Origin Systems. From 1997 to 2000, thousands of players participated in the Counselor Program. In September of 2000, there were 500 players enrolled in the program.

Counselors were assigned a minimum of three 2-hour shifts per week. In 1999, scheduled support hours ran from 3:00 PM to 1:00 AM local time on each shard. The same character that was just slaying monsters would take their shift at one of the Counselor's Guild halls located throughout Britainnia. Prior to their shift, a system message would alert the character to the imminent change in status, the character would be automatically re-clothed in blue robes, and then transported to a guild hall for duty. Participants had to perform a minimum of six hours of counseling per week. Some players routinely volunteered 40 or more hours a single week. Reports indicate that, "most counselors spent less than four months in the program." 1

Volunteers also received special in-game items, such über-wands or special robes. These items, and other items, caused a lot of controversy within the UO community. Charges of favoritism and nonfeasance were regularly heard. These type of rewards were ended in August of 2000, which was prior to the end of the Volunteer Program. Needless to say the then-Counselors were not happy to lose the benefit.

Counselors served a crucial function by providing live, in-game assistance to young and newer players. While they could and did explain game mechanics, they also furthered the online community by encouraging young player to participate in community events, join guilds, visit player-run towns and housing areas, etc. In short, Counselors were the initial means to accessing the greater community for many new players. 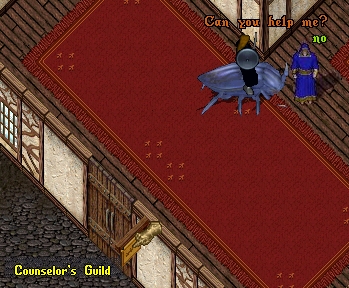 Current in-game customer service/technical support is provided quite differently than in the past. According to one source published in the Fall of 1997 and during the official U.S. Counselor Program, paging the online Customer Support did not actually place a request for assistance into the Customer Support queue. Instead, your request went into a pre-queue, if you will, that was answered by a player volunteer, or Counselor. If the Counselor was unable to resolve the issue, only then was your request transferred to the official Customer Support queue. 2

Counselors were of limited ability, the following is a listing of their capabilities and restrictions:3, 4

In 1999, enhanced Counselors debuted with greater powers and mandatory training.

The program was organized both regionally and hierarchically. In at least one instance, the top position of Regional Lead Counselor managed a team of 90 other Counselors.

Positions within the hierachy included counselor,senior counselor, arch counselor and regional counselor and they were identifiable based on the different coloured robes they were assigned (royal blue, gold, light blue and silver). Volunteers were able to commence at the bottom of the hierachy and then advance their way upwards when they proved their ability or, later, when positions became available. As they progressed, a counselor was given further commands in order to carry the extra duties that became assigned to them. The further a counselor progressed, the more administrative tasks they were required to carry out.

The Regional Lead Counselor "enhanced powers" included stealth, teleporting to any coordinates within game and to other players,and pulling other players to themselves. This "teleporting then pulling" ability was the method used to put people in jail for innappropriate in game behaviour. Due to the significance of some of these powers,and the potential for abuse, the volunteer was not permitted to have any "playable" characters on the same shard (except in one case under special circumstances) which meant that they had to fill out their regional counselling duties via their "counselor character" on a shard different to where they had their in game playing characters.

Upon the closing down of the volunteer program, a lot of volunteers retained their roles within the companion system until that too was also eventually shut down.

On September 19, 2000, a group of Counselors filed a class action lawsuit in federal district court in Colorado. In their claim, they demanded "damages equal to three times Plaintiffs' unpaid minimum wage, and/or Plaintiffs' unpaid overtime compensation, as the case may be, attorneys' fees and costs, and injunctive relief," claiming that Origin and Electronic Arts were in violation of the minimum wage and overtime provisions of the federal Fair Labor Standards Act and the State of Colorado's Wage Act.5

This action was pursued by only a few Counselors, with the majority of volunteers not sharing the same sentiments. Aside from those few people, the community was dismayed with the whole scenario and disappointed with the decision to have the volunteer program shut down.