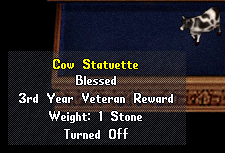 The Cow Statuette is a 3rd year veteran reward, which is used to decorate your house. It will make Cow sounds when walked near if turned on. The Cow Statue was originally a very rare item awarded to five random players during the stress testing of Trammel House Placement on a test server. It later became available through the veteran reward system.