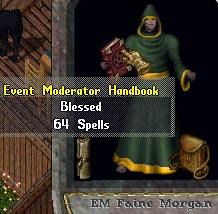 EM Faine Morgan began her EM career as a "floater", or an EM that floats from shard to shard wherever she was needed. She was often seen on the Chesapeake shard, among others.

In March 2009, she was promoted to a dedicated EM for the Origin shard.