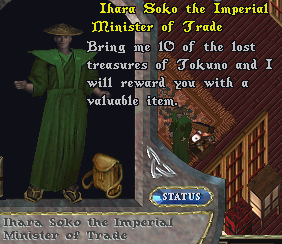 Ihara Soko can be found in Zento on the second floor of the Rokuon Cultural Center, one of the largest structures in that city.

While players can still exchange minor artifacts with Ihara Soko for major ones, the spawning of minor ones ended in October 2006 with the close of the second Treasures of Tokuno event. There have been persistent requests by players to turn the event back on and the devs have hinted this is likely sometime in the future.