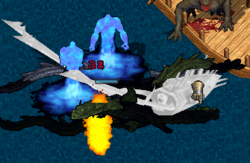 A Leviathan along with it's escort of lesser monsters.

The Leviathan is a pure white sea monster, along the lines of the Kraken or the Deep Sea Serpent but much higher-end. It is found by using a Fabled Fishing Net and is a very hard fight (unless you've brought along a Greater Dragon, in which case several Bandages and a few Greater Heals will probably see you through).

Be warned, the moment the Leviathan appears it will target the character who threw the net in the water (assuming that character is visible and in range). Water Elementals, Sea Serpents, and Deep Sea Serpents will also appear.

Upon beating it, there is a chance of receiving one of the various Minor Artifacts directly in your pack. The odds are helped by your Luck, though the person who initially threw the net has at least a 25% chance of an item.

The Seahorse Statuette and Ghost Ship Anchor are available exclusively from the Leviathan and considered very valuable.