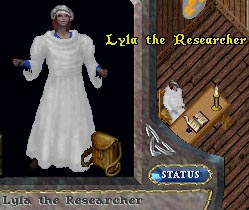 Lyla the Researcher is a Quest NPC who offers the quest Pursuit which first appeared with Publish 57.

She can be found at the eastern docks at the North end of the Jhelom large island, just outside the Second Skin NPC armorer shop.

After a promising start of a career as an academic at the Royal Britannian Academy of Science, Lyla soon found herself putting aside her books more often and carousing at the local dockside pub in Britain. When her mentor noticed a drop in her grades, he suspended her coursework at the academy and sternly sent her out for a regimen of fieldwork under the oversight of his old colleague Iakas the Zoologist in return for an old favor.

Lyla bucked under this directive and soon found herself trying to connive passing adventurers to perform her fieldwork for her without even a gold coin of gratitude. She has taken up residence in Jhelom, far from the monitoring eyes of her sponsor, but close to her favorite respite of dockside bars and wayward sailors in port just for the evening.